Due to COVID-19 our firm will be closed for face-to-face meetings. We are able to meet via video conference or phone calls during this time. 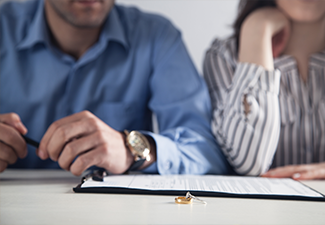 Most people aren’t ready for all the personal and legal decisions they’ll need to make when going through a divorce. After all, you’ve spent years building a life with someone else, and now, you’re asked to split everything up and start out again on your own. One of the major questions attorneys get from divorcing clients is how asset division works, especially when it comes to property.

If you’d like to discuss your concerns about dividing property in a divorce, call me today at The Law Office of Aaron Fonseca in Edinburg, Texas. I can help you defend your rights during this transition and ensure you’re receiving your fair share. I’m able to serve clients throughout the region including McAllen, Mission, and Rio Grande Valley.

What Is Community Property?

When you’re going through a divorce, the court will group all property into one of two categories: community and separate. Community property is generally considered to be any property bought during the marriage (regardless of whose money actually paid for it); however, there are exceptions to this rule.

For example, if you can trace back the purchase of property and show that joint funds were used to buy it — whether you were married or not at the time — this could also be considered community property. Additionally, a couple can also agree on their own what property is community and a judge will generally allow this.

The most common types of community property are the marital home, vehicles, and furniture, but it also covers intangible assets such as income received during the marriage, retirement accounts, and balances in checking and savings accounts.

What Is Separate Property?

This generally applies to assets that each spouse owned before the marriage such as homes, vehicles, jewelry, or retirement funds. However, the concept of separate property can become blurry when marital funds are used to maintain it. For example, if one spouse owned a home that the couple moved into after they were married and they both contributed to the mortgage, the spouse who’s not on the deed can request their payments be reimbursed to them.

What If We Agree on Dividing Property?

In general, the court will approve an agreement by both spouses on how to divide property if it’s deemed fair and equitable to each party. So, if you are still on relatively good speaking terms with your ex-spouse and can decide between yourselves who will get what asset or how to divide the marital home, you can save a lot of time and money on court and attorney’s and fees. However, you still may want to retain a family law attorney to consult with on the side to ensure you’ve come to a good deal.

What If We Don’t Agree on Dividing Property?

If you and your spouse disagree on dividing property, you’ll likely need to enlist the help of an attorney and may also be looking at court fees. In these cases, typically each spouse will retain a lawyer who will then negotiate on their behalf to come to an agreement. If you’re still unable to come to an agreement, you can take your case before a judge and the judge will then decide on an equitable division of your property.

How a Knowledgeable Attorney Can Help

Divorces are complicated even under the best of circumstances, and you’ll need to make a number of decisions now that could drastically affect your finances in the future. If you’re in the Edinburg, Texas, area and would like to speak with an experienced family law attorney about your divorce, reach out to me at The Law Office of Aaron Fonseca.

What To Do As An Injured Passenger Should I Still Hire an Attorney if I Think I’m Guilty? Common Mistakes to Avoid After a Car Accident Is Texas a No-Fault State?